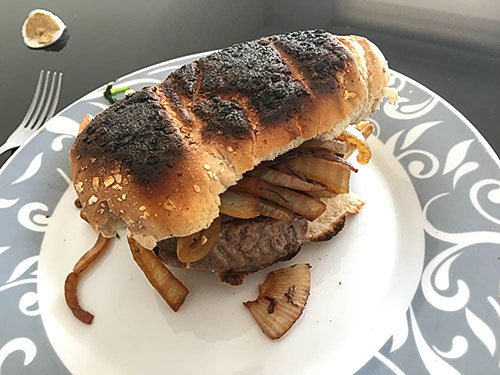 Yesterday afternoon, I started getting queasy again, and I opted only for a dinner of Ensure. By the way, that stuff and electrolytes have become my best friends. By now, I was feeling like I had the flu coming on.

Like any large clinic, Ruiz has groups of staff that work together as a team. This evening, Dr. Priesca came to administer my evening injection. I told him I was sick to my stomach most of the day, and he started me on a bunch of meds. I went to bed early, waking several times in cold sweats and wet sheets. Eventually, the “flu” broke, and I slept like a baby, waking well-rested at the crack of dawn. I felt so much better, and that’s supposed to be the worst of it. I’m done with the hard part :). Not to tempt fate, I took my morning medication with a bottle of Ensure.

Dr. Leon came by for the morning injection. This is going to be my routine for the next several days, except that on Monday, I go to the hospital to have a PICC line (a big catheter) inserted into a main artery above my clavicle. This “portal” will be used for all future I.V. work, including stem cell harvest, chemotherapy and stem cell transplantation. It will stay in for over a week.

My appetite came back in spades. Judy made me a well-done hamburger with grilled onions on a burnt bun. Delicious. Pretty soon, even that will be off limits after I enter a stage called, neutropenia, when I can only eat reconstituted, freeze dried food, to ensure I consume no bacteria.

Yesterday (Day -10) started out pretty bad. But it ended just fine. Judy went down to the pharmacy and got four bottles of electrolyte drinks, two peach and two coconut. So, I drank lots and had lots infused in my drip. We’re supposed to drink a minimum of three liters of water per day during chemo, and today I clearly met that goal.

I’ve read that there’s a service in Vegas that will bring an I.V. drip to your hotel room if you’ve had a hard night of drinking. Hmm.

I finished yesterday’s chemo fine, and they gave me a second shot of Amal (anti-chemo-sickness medication) before I left, just for safe keeping. I did need to add another pill to that later, but I ate a pretty large dinner, most of a pre-cooked chicken from Walmart, where we had shopped earlier. I’m already in the “eat carefully” stage where everything needs to be fully-cooked, well-done. So, we cooked the chicken even further. Dr. Ruiz said that anything pasteurized is okay, and anything cooked for three full minutes in the microwave should be fine, too.

This morning, a doctor came by the apartment to give me a subcutaneous shot of Filgrastim, the stem-cell mobilizing agent. This mobilizes the cells out of the bone marrow and into the blood, which can become painful to the bones. I’ll be getting these twice-daily for a week now, followed by the harvest (aka apheresis). Apheresis is basically drawing the blood through a glorified centrifuge, which will separate out the blood components by density: white cells, red cells, plasma and stem cells. The stem cells are then cryogenically frozen for Day Zero.

Then, I’ll do two days of strong chemotherapy using mesna and cyclophosphamide. The next day is Day Zero, when I get my stem cells back. Some people start feeling energized with less disability, even before the one hour process is complete. I’ve seen videos online where people clap to your new “birthday” as you return back to the waiting room with the rest of the group. Fifteen of us will have a new, same birthday :).

I was up three times getting sick, which was apparently more than anyone else in Group 1, but four of five of us got sick to some degree. One of the big problems was that I couldn’t keep any oral medication down.

I’m back in the chemo chair again now (day -10), but the nurse started me off with a bottle of saline for rehydration, and she included additional medication that neutralized most of the queasiness almost instantly. Ahh. Earlier, I felt like I might if I had drunk a whole bottle of tequila last night.

Five or six more hours to go, then I’ll have a week off from the cyclophosphamide. We’re supposed to feel better this weekend I’ll give myself a break from my strict, anti-inflammatory diet, but for the next few weeks, everything I eat needs to be either pasteurized or thoroughly cooked.

Cyclophosphamide is a pretty harsh chemo agent. They’ll be administering four doses, which is apparently much less than used to treat cancer. The drug is diluted in a saline solution and dripped into my bloodstream through an I.V. It will begin to kill off my immune system. There are a few other medications included in the drip to help with side effects. I’ll do the same treatment again tomorrow, then in nine days, I’ll do two more again after they harvest my stem cells.

I’m sharing a room with four other people in my subgroup, we are from all over the U.K. and USA. Each of us is hooked up to a drip machine and each has a caregiver seated next to them. I’m the only male in the total 15 people here during this four-week treatment period. The women are of varying ages, none younger than 30 years, and they have varying levels of disability.

Ten minutes into the drip, I was very uncomfortable, but it got better soon afterward. I’m about a half-hour into the several hour process. No photos are allowed in the chemo room.

I’ve had dozens of I.V.s inserted over the last few years, and I must say that the nurse who inserted this one did a fantastic job.

Earlier today, we learned a lot more about Clínica Ruiz. To date, they have done 99 HSCTs for MS. (I think the clinic in Moscow has done around 550.) Every one of them has made it through the treatment, and only three people had to be admitted to the hospital, primarily for dehydration. There are 300 people working in the entire clinic, and they see 1,000 people per day. The staff is very friendly and professional.

I’m not sure yet when they shave my head. This is done so that when I start losing my hair due to the cyclophosphamide, it doesn’t start falling out and making a mess.

By the way, I found this amazing presentation from one of the foremost experts in HSCT for autoimmune disease. It pretty well sums up everything, and had I found it sooner, I would have omitted some of background posts.

Yesterday’s recap: 11 hours worth of testing on 1 hour of sleep. Made it, though, and the cardiologist said my heart is in perfect condition ????.

Today should be an easy day. It didn’t start until 11:30 am, so I caught up on sleep last night after Judy (my Mom) and I walked a few blocks to a grocery store and bought a couple of steaks, which we fried up for a nice but quick dinner.

Tomorrow, I have my first round of chemotherapy. I’ll explain more about that later.

Judy and I went to the grocery store today to stock up on living necessities.

By the way, I found out the hard way that HBO Now, STARZ and Showtime on-demand don’t work in Mexico. I did find a ten dollar per month service that tricks your device into having a USA IP address by using a VPN tunnel, though, and it seems to work fine.