My diet was probably decent on the nutrition scale of "western" diets, but compared to a more traditional, "paleo" diet, it did include a lot of highly inflammatory items.

Gluten is probably the worst and most notorious lectin for creating inflammation in the body by destroying your small intestine lining (i.e. creating a "leaky gut") and causing gut dysbiosis (an microbial imbalance). The primary dietary source of gluten is wheat. Furthermore, today's American wheat is made "Round-up Ready." This means that the crops are tolerant to glyphosate, the active chemical in Monsanto's weed-killer, Round-up®. Glyphosate helps in several ways to increase crop yield, is used extensively in American wheat farming, but this chemical is also highly damaging to the gut[1].

Corn in the USA is genetically engineered (GMO) to produce a high amount of an insecticide called Bt-toxin[2]. Again, this increases crop yield but at the expense of gut health. Doctors are beginning to discover how important the gut microbiome is to human health; destroy its lining or the important bacteria therein, and you'll wreak havoc on your health.

There is plenty of new evidence to suggest that there is a direct tie between the gut microbiome and autoimmune disease. See the article, Does Dysbiosis Cause Multiple Sclerosis?, by Joseph E. Scherger, MD, MPH; June 30, 2016 (V.P. at the USC Keck School of Medicine)[3]. And this new research:

...the entire study was completed at Mayo Clinic Rochester. This study involved a big team [16] comprised of neurologist, gastroenterologist, bioinformatician, system biologist and study coordinators. We found that  multiple sclerosis patients indeed have a gut microbiome which is different from what is observed in healthy people[4].

More on this research:

Gastro dysbiosis has been implicated in the development of multiple sclerosis (MS) as a study continues to lay bare the gut microbiota’s influence on a range of chronic conditions[5].

This study concluded that patients with RRMS not only had a different gut microbiome, but there was a distinct difference between the count of specific types of bacteria in those patients who's disease was active verses those who were in remission. The number of types of bacteria was similar for all people studied, but quantities of specific groups were different among them. The ability to determine which group the patient was in by measuring the gut microbiome signature was accurate to 92%.

Back to dysbiosis, consumption of pain relievers (NSAIDs), especially on an empty stomach, is another way to damage your gut.

A leaky gut allows toxins from your food to directly enter your bloodstream. Your body responds with inflammation, a reaction designed to trigger your immune system into attack mode. In an ideal situation, this mechanism is exactly what you would want, but excessive rates of inflammation can create other problems.

As your adaptive immune system learns to recognize and attack these malicious proteins, it can become overly educated and overly aggressive, eventually mistaking normal body proteins for malicious ones and cross-reacting to them, too. This process is called molecular mimicry.

The whole thing is basically a case of mistaken identity, that many doctors believe starts with a leaky gut, then the immune system becomes activated because of a chronic state of bodily inflammation, switching the immune system into a chronic attack mode.

To learn and understand more about cross-reactions and molecular mimicry, based upon Dr. Roy Swank's research, listen to the first half of this presentation by Dr. John McDougall:

NOTE: I found the first half of his lecture very informative. After that, McDougall starts to contradict Dr. Ballantyne's research, and at some point there seems to be even some of his own contradictions about fats and oils. Ballantyne[6] is very consistent across the board.

Other inflammatory foods include dairy (especially bovine), nightshades, legumes, egg whites, seeds, nuts and most grains & pseudograins, all of which contain damaging lectins or agents. Lectins are natural pesticides that plants produce to protect their seeds. Even worse, some lectins (like gluten) actually bind to nutrients, inhibiting your gut lining from absorbing what might otherwise be beneficial nutrition. Furthermore, most western dietary foods are made with trans fats and hydrogenated fats, usually vegetable or seed oils (corn, rapeseed, canola - which is actually rapeseed, sunflower, safflower, palm kernel, etc), most of which are bad for your heart heath because of their high levels of omega-6 fatty acids. They are utilized purely for convenience because they are inexpensive, extend shelf-life, or have a particular consistency at room temperature. Cutting everything in this paragraph from my diet was very difficult at first. I stuck with it, and after a few months, it wasn't too bad, and now I've been holding strong for almost a year. Starting from a "normal" weight, though, I dropped 35 pounds, mostly in the first few months. I have gained five of that back since. 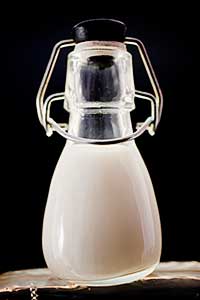 I also consumed a decent amount of bovine (cow) dairy. Most bovine dairy from the US is loaded with antibiotics and other unnatural substances. Here, the cows are fed grains and other foods that are not part of their historically natural diet. Those grains are also polluted similarly as above. Then, this unnatural food consumption pollutes their meat and milk, which in turn becomes our food. Grass-fed, organically raised cows make for much healthier (and expensive) meat, yet even organic milk can create inflammation because it binds to toxins and pathogens and drags them through even a relatively healthy gut, into the blood. (Note that many medications are mixed with dairy products for exactly this reason, to help them enter the bloodstream.) Having a leaky gut, as is present in the majority of people with an autoimmune diseases, further amplifies these problems.

You've probably heard the word "paleo" thrown around a lot; it's based upon the diet that our ancestors had (i.e., paleolithic man), which many believe formed the basis for how our "modern" digestive systems developed. The fact that our western diet has become so far removed from the paleo diet is to what many doctors attribute so many of our newer health problems.

6. To read further about this idea, I recommend The Paleo Approach by Dr. Sarah Ballantyne. Hers is a comprehensive guide to understanding the immune system and how diet affects it. I've also found http://paleoleap.com to be very informative.