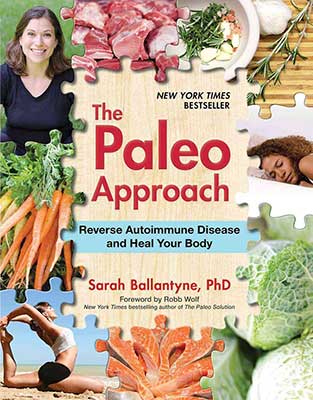 When first I was told by a homeopathic practitioner that I needed to change my diet, I was in complete denial. I started referring to her as "The Witch Doctor." Then others I met with MS said they had been controlling their MS exclusively with diet; I began to let the idea sink in. Nobody wants to change the diet they've developed and rationalized over their lifetime. Nobody wants to ditch their favorite comfort foods. But the more I looked into it, the more I realized there was substantial evidence to support this idea. I realized it came down to a matter of changing my diet or losing the battle to MS. It's still not easy to do, but I believed I had no real choice.

I asked my MS neurologist about the Autoimmune Protocol (AIP) and Paleo diets. His response was that all his MS patients who have successfully managed to switch to and stick to that diet have reported great results. The big problem is that it's hard to do, and most don't succeed. He said he personally doesn't know very much about nutrition because they don't teach it in medical school. Wow. That threw me for a spin, especially because of his report of good efficacy. Seems to me that if you're a doctor, and something is helping some of your patients, you should want to know a lot about it. (Update, June 2019: Dr. West now advocates for his patients to follow a healthy diet, but he's not strict or clear about what that means.)

The bulk of the information I used to narrow down what I could and could not eat came from Dr. Ballantyne's book, The Paleo Approach. I also purchased the companion book, The Paleo Approach Cookbook, which I lent to a friend who's a chef, and I haven't gotten it back. I have since complemented my diet knowledge with information garnered from Dr. Stephen Gundry's book, The Plant Paradox, Gundry's website, https://gundrymd.com, plus tidbits from http://paleoleap.com and https://drjockers.com/.

Just because I figured out what was okay to eat and what wasn't, doesn't mean that I was ready to cook food that I was ready to eat. There are a lot of great suggestions in Ballantyne's books that simply don't apply to my tastes and what I'm able to get from the local grocery store. It's pretty easy to switch one's fresh vegetables from "regular" to organic. At least in California, it's easy. I just picked my typical diet from the other bin, labeled so. When I actually started reading the labels of the packaged foods I had been regularly eating, I knew things had to change more significantly than I had originally anticipated.

Nearly 100% of the canned and packaged goods were disqualified because they contained non-paleo vegetable or seed oils (including soybean oil). Making matters worse, most were hydrogenated or contained some amount of trans-fats. I believe the reason these oils are used instead of the paleo varieties (like avocado oil and coconut oil) is twofold. First, soybeans are a subsidized crop in the USA, so soybean oil is cheap. Secondly, especially when hydrogenated, the non-paleo oils make packaged foods with a longer shelf life, which is a major convenience.

I soon found myself shopping at more "healthy" stores, like Whole Foods and Lazy Acres, which is much more expensive, but you end up eating foods which are actually healthy and nutritious, not just toxic fillers. Not that I needed to lose weight, but I started dropping the pounds rather quickly. In the first three months, I think I lost about fifteen pounds, and after the first year, I was down almost forty. Yes, I said forty. I was not overweight, to begin with, but now felt skinny. I have managed to gain about eight pounds back from my low point.

My gut is clearly damaged, and this is one reason I lost weight. My gut microbiome is just not working correctly, and I therefore don't absorb nutrients as well as others might. But I also stopped eating crap, including the large amounts of sugar in the Western diet. Really, sugar is in everything. Mind you that I did not have a sweet tooth, but I did enjoy the occasional frozen yogurt or pint of designer ice cream. That's all gone from my diet now. (I do make my own frozen, coconut yogurt deserts now.)

Results: After about 2-3 months on my new diet, I started feeling better. My walking disability was unaffected, but I had more energy, and many of my other MS symptoms began to wane. My vision problems resolved significantly. Brain fog improved considerably. After 6-9 months, my sensitivity to heat improved. Now, if I'm very strict, I notice decreased pain levels. If I cheat, like I did last week by eating a gluten-free muffin, my pain skyrockets back up and slowly resolve for two days. Sugar, or more precisely fructose, is obviously a pain trigger. I assume this is because it creates a particular inflammatory reaction.

Nine months after changing my diet, I quit my DMT, Tysabri, to start a washout in preparation for my HSCT. Many people suffer a rebound effect during a Tysabri washout, but I was absolutely fine, and I attribute this to my diet. It's possible that the Tysabri was unnecessary as I began this DMT only a few weeks before changing my diet.

So, what do I safely eat? What did I find practical for me to buy, prepare and cook, which is appealing to my taste? Below are the ingredients. Of course, they are all grass-fed, organic, and soy, hormone & antibiotic-free. Stay away from sugar!

UPDATE 3/2018: I have finished reading a new diet book that I just love. Dr. Stephen Gundry is a heart surgeon who started noticing a pattern in his own patients, many with heart disease. When he began to experience health problems of his own, it led him down a rabbit hole, learning and studying about nutrition. In his book, The Plant Paradox, Gundry outlines an anti-lectin diet, specifically to: 1) help people to generally feel better, 2) lose weight, 3) decrease pain.

Like Ballantyne's book above, The Plant Paradox has an Amazon rating of about 4.5 from a thousand reviewers. Also, there are all kinds of YouTube reviews and testimonials. Ballantyne and Gundry don't always agree, but mostly they do.

If you are in pain like I was, you absolutely must reduce inflammation in your body through your diet. Is drastically changing your diet easy? I was watching a movie last night where a character, sober for ten years was being confronted by someone brand new to AA. A newbie asked him if it gets easier as time passes. "It doesn't get easier, but you get used to it being hard." I love that line! It sums up so much about the challenges of MS.

After you get used to your new diet, you will realize that it's still very diverse. You can eat at restaurants if you're careful what you order, and you must not be shy to ask the waiter questions and make special requests. Eventually, you get used to it. I'll look at