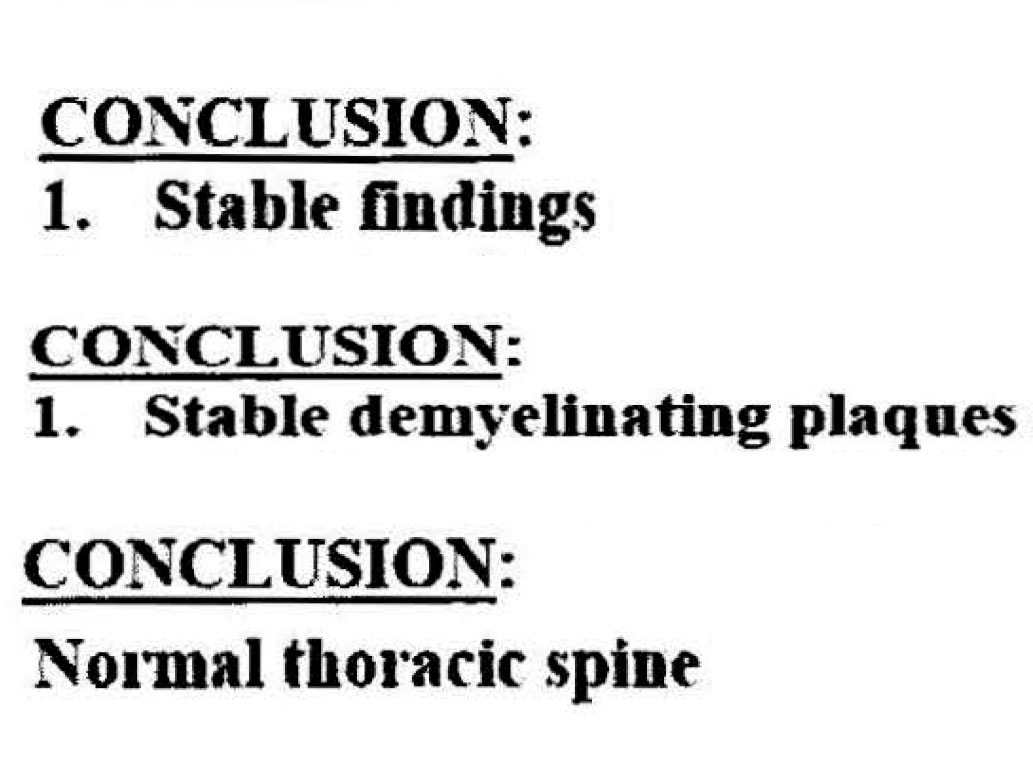 A couple of weeks ago, I had four MRIs: brain stem, C-spine, T-spine, and L-spine. I'll spare the details about the cost and pain they caused me. The great news is that there's no new visual evidence of activity related to MS! (Yes, that's great news; however, even better news would have been a decrease in lesion size or quantity; read on.)

I've had MRIs at annual intervals since I recovered from the chemotherapy given as part of the HSCT procedure, beginning about six months post-transplant. This was my third annual set; however, this was my first set that went all the way from head-to-tail. The tests were done without contrast (no gadolinium).

It's pretty hard to argue with this type of conclusive evidence. Although MRIs don't paint a comprehensive picture of MS and its progression, they are generally considered to be the gold-standard of empirical evidence. Yes, it's true that one could indeed experience MS-related problems that do not appear on an MRI, but for the sake of empirically evidenced disease activity and progression, this is the best single test we have. And in my case, there's been no other perceptual degradation.

I must mention that since I've completed my HSCT, newer DMTs have become available to address MS. One well-known therapy is Ocrevus (ocrelizumab). I know MS patients who have been on this drug now for a couple of years, and the general word is that it works fabulously. Furthermore, patients have been reporting shrinkage of MS lesions. I mention this because had I not undergone HSCT, I would have had new options available, and therefore, to compare my current state to my former status quo would be disingenuous. The rest of the medical world kept advancing as I healed from HSCT, and the newest therapies are encouraging the body to repair damage in addition to halting further damage. Recall that I did have a significant reversal of damage after HSCT, but that process has tapered off significantly.

As an intellectual exercise, it's interesting to wonder which avenue would have served me best if I knew before my HSCT treatment that Ocrevus would have become available approximately 18 months after my scheduled HSCT treatment date. Would I still have gone for the HSCT procedure, or would I have waited for Ocrevus? Don't forget that my MS was quite aggressive; I don't have any knowledge Ocrevus addresses these types of cases.

I have to use the wayback machine to recall my state of mind before HSCT. I was in bad shape. At that time, I was pretty sure that I would be in a wheelchair within another two years. I currently walk unassisted, and I can easily go on a mile-long hike. What doing HSCT did for me in June of 2016 was to buy me more time. Valuable time. It's impossible to know which treatment would have reversed more damage, but had I waited for Ocrevus (assuming it was to become such a great drug, which was a big assumption at that time), my disease would have been further along in its progression. Even for this hypothetical exercise, I think my decision to do HSCT when I did it was the best choice.

It will be interesting for me to follow the current batch of Ocrevus users to see how far they heal compared to me. The current availability of Ocrevus will, of course, change the decision-making process for new patients considering HSCT. They will have one more arrow in their quiver to exhaust before they consider such a drastic measure. There's a new study comparing HSCT to DMTs. Here's one from a year ago that favors HSCT for RRMS.

UPDATE: Even while Ocrevus has remained a viable choice for a couple of years now, at least some people with aggressive MS are continuing to choose HSCT. I now see Clínica Rúiz banner ads on most of the MS-news websites. Their own HSCT website has changed from a single page of Spanish to a comprehensive, English website, chock-full of semi-cheezy stock photos. I can conclude that business is good in the HSCT for MS department.