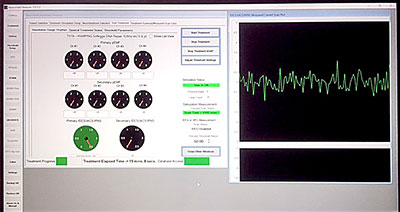 For the last two weeks, I've been using a different protocol while doing my daily hour of neurostimulation. I did three months of daily therapy, using tDCS, but I've since switched to "Random Noise, Alternating Current." This has provided me wiith significant relief!

You might recall that I had noticed relief during my first month of tDCS (transcranial direct current stimulation). Well, after three months, I had definitely hit a plateau somewhere along the way. I went back to my neuro-therapist, Dr. Tiff Thompson, and she suggested that I change the protocol to tACS. By the second day, I was already starting to feel the same type of improvements that I was seeing with tDCS in my early stages.

Dr. Thompson mentioned that initially, she wanted to use the tACS protocol, but I was unable to tolerate it early on. I guess I had to condition myself to transcranial therapy before I was able to use tACS. In any case, I'm generally feeling much better lately.

Last month, I endured a significant incident. I was dealing with something which was causing G.I. problems. I didn't figure this out until long after the incident occurred, but I had slowly been depleting myself of pain medication as meals were simply going right through me. In addition to causing increasing levels of pain, I was experiencing withdrawal symptoms as this was medication I have been on for years now. I was not thinking rationally and was up all night in pain before I finally gave in and upped my dosage. Finally, things settled down.

I have since worked out a strategy with my neurologist to prevent that type of situation from ever occurring again. It's odd that they tell you to be very careful to never interrupt your medication, but they don't tell you what to do if you have no control over keeping the meds in your body. This becomes even more critical when you're (as I am) taking extended release medication, which needs to be in your digestive system for 12 or 24 hours.

The good news is that things seem to have stabilized since changing my "stim" protocol and having my digestive system return to normal.

My mother just came to visit. I haven't seen her since Thanksgiving (Nov 2016). She said my balance is definitely much better since then. She says I also speak more fluently. I've definitely noticed improvements in balance, speech and sleeping habits, and apparently, others are noticing these improvements, too. My walking abilities, however, are more dependent on how I feel at the moment. My physical therapist says my strength and control are better in my left hip/knee and ankle, but I see him infrequently, and I try hard while he's encouraging me, which is not typical of daily activity.