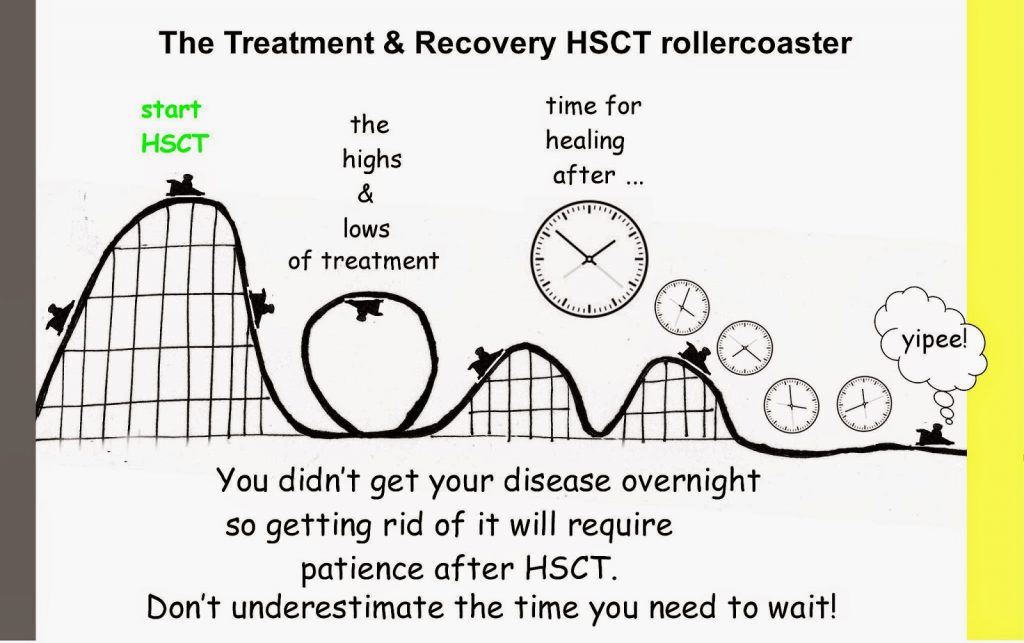 I thought everything would be great if I could just make it back home to my comfy surroundings back in Santa Barbara. Well, I’m glad I set that short term goal. I’ve been back now for nine days.

I was kind of fantasizing that I’d have some net gain by now, but as I was instructed by Dr. Ruíz-Argüelles in my final consultation, it’s rare for people to notice improvements in MS symptoms so early. 12-18 months is more typical if you notice them at all. Of course, I still believe I will be in that group since I completed HSCT relatively early in the course of the disease.

Recovery has been challenging. Being home is nice, but it’s not the glorious finish I had imagined. I’m still sleeping 10-12 hours per night, and it took all I had to stay home on the summer solstice, while the entire town was partying from sun-up to sun-down. The solitude is tough, too. I feel like I’m in one of those prisons for the wealthy: good amenities, but the fact that you can’t leave is your punishment. I’m having my groceries delivered to me by friends.

As is typical during “the highs and lows of recovery,” my CNS has been doing all kinds of crazy things. Old and new symptoms sometimes make me feel like an alien has inhabited my body. A couple days ago, I experienced brand new numbness in my right arm and hand; I thought I might be experiencing a post-procedural exacerbation. But it went away in a few hours. I went to the online support group, and someone else in my class was complaining about the same types of issues.

My pain has definitely returned to the same levels as pre-procedure. I had my MS neuro increase my carbamazepine (tegretol) by 25% (500mg/day). 600mg/day is the maximum dose, which I’m trying to avoid. I’m also playing around again with my cannabis tincture and CBD oil. They CLEARLY reduce pain levels, no questions asked. I am grateful to live in a medial marijuana state.

Last Friday, I did blood labs, but I have to wait ten more days to get in to see an oncologist/hematologist. Well, at least I’ll have established a new relationship with an important doctor, one needed for HSCT recovery. Upon her say-so, I plan on resuming concert photography at the Santa Barbara Bowl on July 16th (Day +48). Hopefully, she can find some way to get me my five remaining rituximab infusions over the next year; if not, I’ll have to head back to Mexico for them.

Note that I stopped taking my Ampyra (walking medication) on Day -4, so as not to interfere with myelin regrowth. As far as I know, there is no scientific data to support the idea that Ampyra, which fills in missing myelin gaps with potassium inhibitors, has any effect, one way or another, on myelin regrowth. The fact that it changes the normal body chemistry where myelin is missing, made me a little cautionary. Clearly, I am less coordinated without the Ampyra, though, so I will resume it a week or two before going back to concert photography. Obviously, I don’t want to do anything which could inhibit myelin regrowth. Nobody seems to have an answer on this.

My hair is starting to fill-in, very slowly. It appears that the new hair is pretty much all grey. On my face and head, it’s either clear or gray. It’s probably going to fill in grey. It also seems very thin. I might need to buzz it off once before it’s thick enough to grow out. We’ll have to play it by ear.

I feel like I’m getting weaker, just hanging around the house. Some days it’s really bad. I think I’m going to try to gently easy myself in to some basic yoga. The main problem is still the damn pain; I don’t want to willfully exacerbate it. It’s a conundrum. It’s the primary reason why I did HSCT in the first place. Fingers crossed that it eventually goes away.