Why I did HSCT

MS usually shows two related but different manifestations. There are discrete "attacks" or flareups or exacerbations or relapses, and there is usually a steady disease progression. Most forms of MS start with debilitating attacks and little of a steady progression of disability, then they transition to predominantly debilitating progression.

With the exception of Ampyra, which attempts to minimize walking disability in people with MS, all the other (USA) FDA approved medications for MS are considered disease modifying therapies (DMTs). They basically attempt to slow down the rate of disease progression and minimize the number and/or severity of attacks, without actually increasing general quality of life. Some people do very well on DMTs, but others don't. Even the best DMTs out there, on average, claim to stop only about half of MS attacks and slow the disease progression very slightly, if at all. Some people are lucky and have very good results with one DMT or another. I tried two different DMTs and found one (Tysabri) that seemed to stop attacks, but my disability was still worsening (i.e. the disease was still progressing).

According to veteran & guru George Goss, Autologous Hematopoietic Stem Cell Transplant (HSCT or ASCT) therapy has been around for twenty years, having some 500,000 total transplants completed, mostly for cancer, and some 2,500-3,500 of those for MS. The treatment is really a blood infusion chemotherapy, with a followup autologous stem cell transplant. In an autologous transplant, the stem cells are your own, harvested from your body before the immune system is destroyed with chemotherapy, then subsequently transplanted back to your body. HSCT research for MS and autoimmune diseases first began 15-20 years ago.

HSCT is nearing the completion of a clinical trial in the US and abroad. Dr. Richard Burt, Chief, Division of Medicine-Immunotherapy and Autoimmune Diseases at Northwestern University's Feinberg School of Medicine is leading the trial, which is now in it's third stage, a stage which includes comparing against a control group (who does not get the therapy). This means that it's pretty far down the tracks and very likely will someday become FDA approved here in the USA. From what I've read, I'm guessing that means around 5 more years. HSCT is, however, done regularly in a dozen other locations around the globe, the two clinics largest by volume in Puebla, Mexico (99 cases completed as of 5/28/2016) and Moscow, Russia (over 550 cases completed as of 6/2016).

By the way, I applied for Dr. Burt's clinical trial, and I was rejected because my MS was not visually active enough on my MRIs (i.e., I had no gadolinium-enhanced lesions), apparently being controlled well-enough by my DMT. With all due respect, of course I disagree with Dr. Burt tremendously. Gadolinium-enhanced lesions are one of many signs and symptoms, and the pro-HSCT community thinks doctors put far too much emphasis on that single one. What about the fact that my disability is worsening quickly? Dr. Burt, what if you were quickly losing your ability to walk? Would that be well-enough? I doubt it.

I get it. Dr. Burt is looking for candidates who can best bolster his study results, which can become at odds with a doctor's moral obligation to first help patients in need. I guess the justification is that when this procedure does become FDA approved, then patients of all types may suddenly have access to the treatment.

So, if HSCT could be approved in the US in just five years, then why did I risk going abroad to have it done now?

(UPDATE: At over six years since I wrote this, HSCT is still not FDA-approved in the USA. My successful HSCT is already 6.5 years old, and multiple new studies have confirmed the validity of my choice!)

One of the first rules about HSCT for MS is that the sooner in the course of the illness that you get it done, the more likely it is to be effective, and the more effective it is likely to be.

While there are plenty of first-hand accounts of people who have had MS for 10 or 20 years having great success with HSCT, they pretty much all say that they wish they had done it sooner. Time is of the essence!

Based upon recent figures available for HSCT for MS, average rates of success at putting MS into permanent remission are probably better than 80%, depending on how far along you are in the disease course. Rates of significantly reversing disability and damage are around half. Right now I can walk, unassisted, short and medium distances if I go real slow and steady. I believe if I stay only on a DMT, I will be in a wheelchair before HSCT is available to me in the USA. If I do HSCT now, and it works as I hope, however...well you get the idea. Reversing chronic nerve pain is my number one priority, and I don't want to endure that even a day longer than I have to.

One problem with exact success rate figures about HSCT is the fact that so many people go abroad to have the procedure done, and they never return for follow-up studies.

The USA is not the only "first world" country who is lagging behind in performing HSCT for MS. See this news clip from Australia:

And how about the safety factor? The vast majority of people doing HSCT today are using a non-myeloablitive approach, which is much less harsh on the body. In exchange for not completely wiping out the immune system, you loose just a bit of potential efficacy, but you gain safety. Mortality rates are half and chances of complications are less. 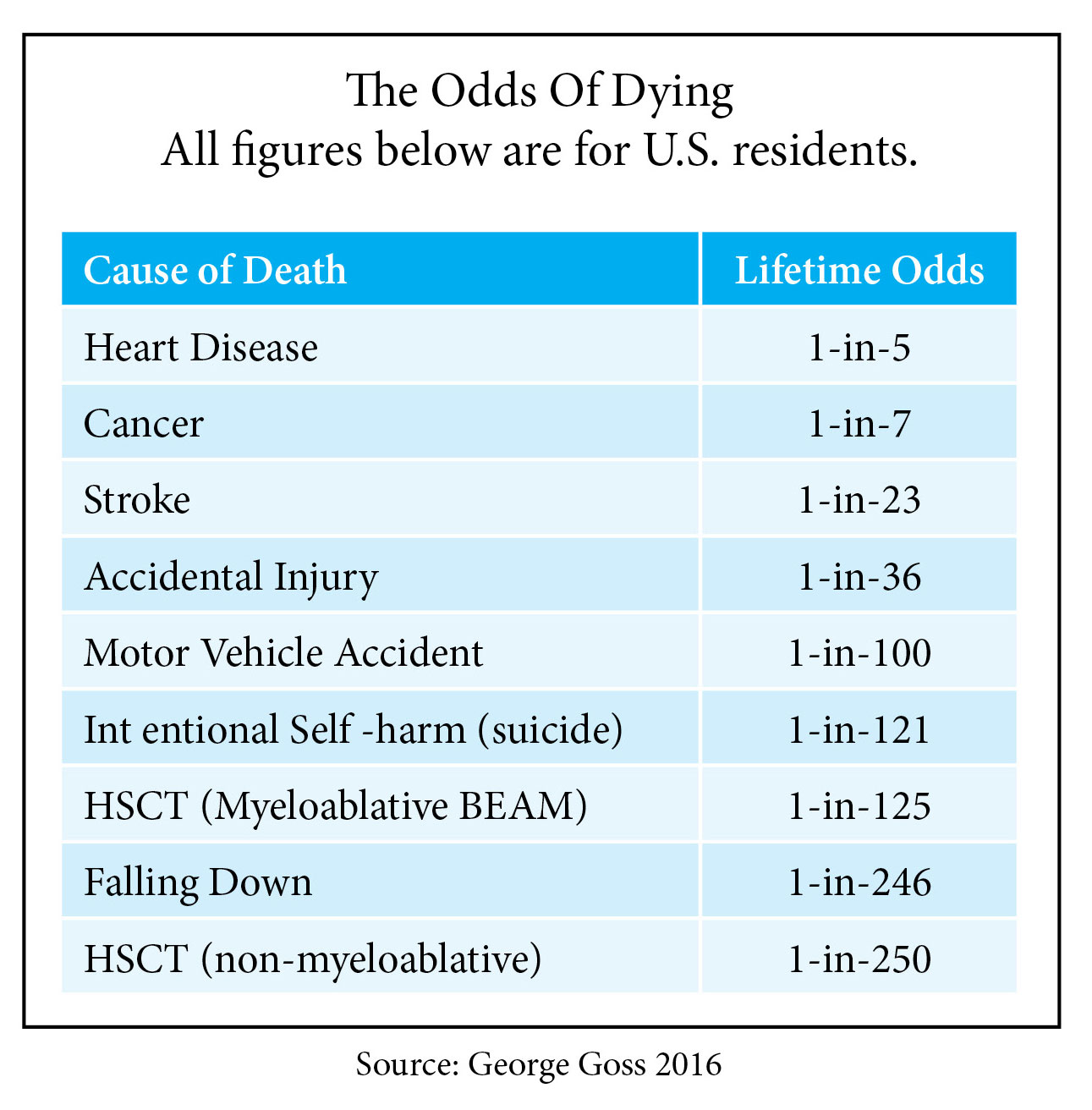