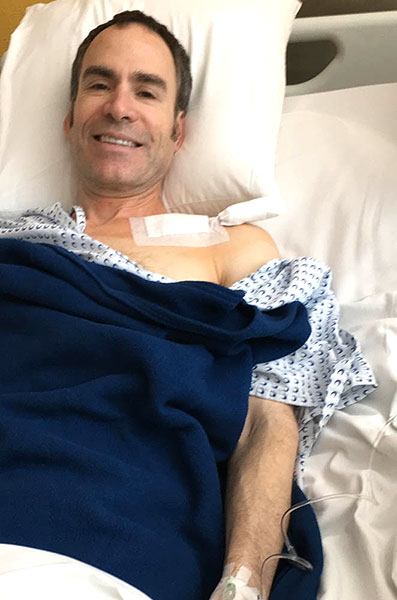 Yesterday, everybody in Group 1 went to the hospital to have minor surgery. We had a hemodialysis catheter inserted under our clavicle. This is actually a pair of tubes, each as big as a fat vein in your body, together allowing the blood to flow out of the cardiovascular system, through the apheresis machine and back into the body. 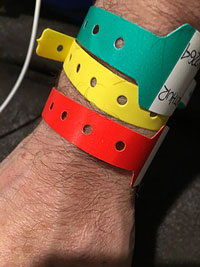 No, I'm not in a Jamaican HosptialThe hospital here was very nice and new. After six years in the restaurant business, I, myself, am very familiar with health code in the USA, and I did notice some peculiarities; however, this was no third world hospital. In fact, the bathroom in my waiting room was enormous, with a giant, marble shower to boot. Everyone was extremely courteous and professional. In the few hours I was there, a maid came by to clean up, and she got my initials on her rounds sheet to prove it.

Having done several previous surgeries, I was not nervous, even a tad. The anesthesiologist made sure my entire time was absolutely pain-free, and the quick, out-patient procedure went off without a hitch. The procedure, itself, lasted only 15 minutes under general anesthesia.

Afterward, I celebrated with some corn-flour quesadillas. I hadn’t had cheese in almost a year.

When we got back to our apartment, we were moved, by our request, to a new unit, further from the disco club across the street. We had two nights in a week, where they were blasting loud music until 5:30am, and for one of those, construction workers started a jackhammer at 7:30am. The hospitality company was gracious in accommodating our move, assisting us with a shopping cart, transferring from one building to the next via the basement garage to keep us out of the thunderstorm’s pounding rain. Last night was much quieter! I think we’re the first ones to reside in this new unit. It’s super clean, but it’s missing a few things, like toilet roll holders and an RO water system. Felipe brought us a 10-liter bottle of drinking water.

Later last night, there was some expected discomfort from the surgery, which was to be handled only by Tylenol (here, Tylex). I was up at 7am for my morning shot of filgrastim (stem cell mobilizer), took another Tylenol, and went back to bed, finally, for two hours of quality sleep. Now, I’m back to pain-free again. That wasn’t bad at all, considering it was the only surgery of the protocol.

By the way, I went back and added some photos to some earlier posts.