I Am Not Brave 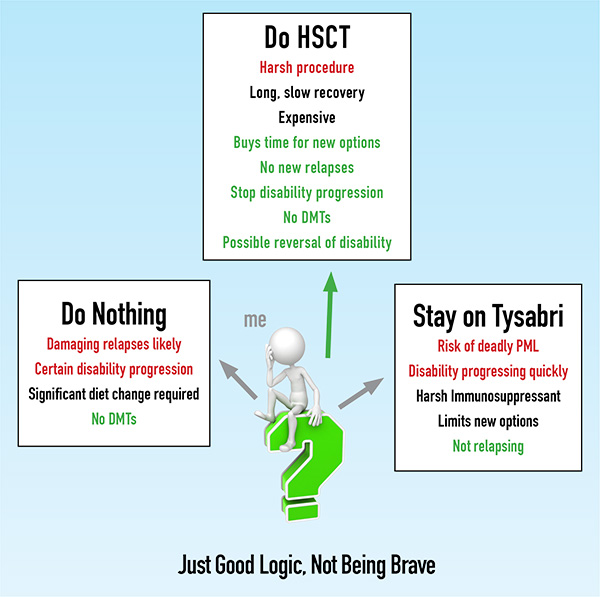 Many of my best friends and close family have called me brave for choosing to do HSCT.

Let me make this clear. I am not brave for doing this.

Choosing to do HSCT is simply taking the best of the available options to prevent worsening a life-threatening disease. HSCT was less risky for me than doing nothing.

Regarding my condition prior to doing HSCT, maintaining the status quo would literally have been stupid. Giving up. Waiting for a miracle, highly unlikely to happen. I had been a sharp study of all the potential disease modifying drugs coming down the pike. Waiting a decade while continuing to slide towards being un-ambulatory, was of itself risky. I would be sure to lose at least a significant portion of my income, assuming my brain didn't continue to deteriorate as well. I might have to move back in with my mother, so she could help take care of me, a sharp change of lifestyle for a single, 50-year-old man!

Of all the options I had in front of me, HSCT had the highest likelihood of stoping my MS with the least amount of trauma. The next highest option was to stay on Tysabri, a very effective drug, which is a lit fuse. Lesser strength drugs had proven to be ineffective in managing my disease. The status quo, at best, would have eventually landed me in a wheelchair. Staying on Tysabri, indefinitely, would have eventually put me in at high-risk of developing PML, a deadly brain infection. And as it turns out, staying on Tysabri for longer than a year can affect the ability of successful HSCT and other immunomodulatory treatments. Eventually, I would have needed to switch to another DMT, maybe Ocrelizumab, a new MS drug scheduled for release in early 2017.

While Tysabri may have stopped my relapses, my progression nonetheless continued. Furthermore, it may have been my significant change in diet (dairy-free, lectin-free, alcohol-free, anti-inflammation diet) which was responsible for staying my relapses, not the Tysabri. Halting Tysabri in order to do a pre-HSCT washout was risky, but it ended up being a good decision for me. I experienced no rebound effect, maybe because I maintained my strict diet.

By the way, I hope to relax my diet a bit, post-HSCT, as I start to improve. I'll need to gain some weight back, which is hard to do on the AIP diet.